skip to main | skip to sidebar

New Home for Mews and Moos!

I hope you are having fabulous Tuesday so far!

I just wanted to drop a note to let you know that Mews and Moos has now been transferred to the new and improved tiffanyprochera.com site so it will not be posted here anymore.

But there is lots and lots of new articles and other goodness, such as an interview with composer John Rutter and a discussion on the tools we use to create, at the home site so head over there..... like, now!... and get connected!

Catch ya on the flip side!
Posted by Tiffany Prochera at 8:14 AM No comments: Links to this post

How Playing An Instrument Affects Your Brain

So, a while back in the first episode of Muse TV I talked about some of the benefits of music education – one of them being how it unites the left and right sides of the brain.

Well, there’s more to the story!

In this video below, by educator Anita Collins as part of the TED ED video series, you will learn just how beneficial playing a musical instrument is to your brain function. It is like no other activity in the way that all parts of the brain are activated, such as those that govern auditory, language, memory and motor functions. It’s like a full-body workout for your grey matter!

Even listening to music causes a lot of activity but playing and practicing really set all guns ablazing! But what’s even better is that those connections in the brain are transferred to other activities so, in a way, you end up doing everything better! Pretty cool, eh?

Don’t forget to add your two cents (or a whole semitone if you want!) in the comments section below. Let us know what music has done for you!

Oh, and a little bit of STM news.

Doodley Doo, one of the songs from my first book for kids, Bad Moods And Seven Other Super Reasons To Sing A Silly Song, was recently featured during Canadian Music Week!

There are also hard copies available of the new book, Brain Freezes And Seven More Super Reasons To Sing A Silly Song on the STM online store. Get your copy today!

And if you are looking for an inspiring holiday gift, might I suggest A Candle At Both Ends - my first book of uplifting poetry and prose. It's available at Radiance Gifts and The Forks Trading Company in Winnipeg or online at the STM store.

Have a great day!

Who Are You As An Artist?


This is a hugely important topic for me so I apologize – and not – if I may get a little intense here.

I have always strived to be a positive force in my personal life and in my career.
I believe we need to be conscious of the energy we put out in the world because, whether or not we are aware of it, what we do can have an effect on others.

And that includes our art. We get to choose who we are as artists and what we represent. It can be tempting to take on project that we don’t believe in or that might ultimately cause harm in the name of bringing in a paycheque or because it might be a fun role to play – as though art is strictly for entertainment and really has no impact so what we put out there doesn’t really matter.

In reality, though, things like film, television and music are hugely influential on how we view the world. Remember, television was invented, in large part, as a vehicle for advertising and, in many ways, continues to be so today. And what is the goal of advertising? To make you want to be or do whatever  you see on the screen.

At any rate, today I would like to share with you a video I first saw on Super Soul Sunday – the weekly show on Oprah’s OWN where she speaks with spiritually-minded folk. I love it!

This is a mini-documentary by director John Chester about the musician Michael Franti who spent years writing and performing aggressive, politically-charged songs until he decided that he wanted to put out a different energy and entirely changed his approach. Now, he writes music and children’s books that touch the soul and inspire positivity.


So, when someone asks you to take on a creative project or you are contemplating initiating one yourself, I invite you to look at what the potential results could be and decide whether it is really what you want to put out there.

Sometimes this may take a little investigation. I have made the mistake of choosing to be a part of productions that, while my role was of a benign nature, I likely would not have chosen to participate had I read the script or known the full nature of the project. But we live and learn!

Well, that’s all for now! If you liked this post or have something to say, don’t forget to post your comments below. And if you want more, subscribe to the blog so you’ll always be notified of new posts and feel free to visit my home site at www.tiffanyprochera.com.

Have a great day!
Posted by Tiffany Prochera at 8:19 AM No comments: Links to this post

Learn how to get over stage fright with MuseTV

Stage fright – that moment before your performance or presentation that can seem like hours – and sometimes it does last hours! – where you find yourself shaking with sweaty palms, thoughts of doom running through your head.

You tell yourself it’s going to be a total disaster and you can’t go on. You would rather die!

Getting up in front of a group of people doesn’t have to be a terrifying experience – really, it doesn’t!  But what can you do to get over these nerves so you can still go out and rock that stage?

In this episode of MuseTV, I offer you four tips to help get you back on track.


If you found the video helpful, feel free to share with your peeps, add your thoughts in the comments section below and subscribe to the Mews and Moos Blog for more fun stuff!

In other news, with the approach of fall, I am happy to be starting another season of vocal instruction this week! Yay! Always a fun time of year! If you or someone you know is interested in learning to sing, check out the Music Education video from the last post and don’t hesitate to contact me. With the advances in technology, not only can you take lessons with me in person if you live in Winnipeg but you can also study online via Skye.

What will they think of next?

Well, have a great day everyone! Carpe diem!


Posted by Tiffany Prochera at 8:29 AM No comments: Links to this post

The First Episode of MuseTV! The Power Of Music Education!

I hope you had a great summer and are looking forward to the coming of fall. You know, I think it`s because of so many years going to school but September still seems like a fresh start to me. I love it!

This week, it is my pleasure to share with you all the very first episode of MuseTV! MuseTV is a series (hopefully!) of videos with tips for musicians and music teachers hosted by yours truly. Of course I will be posted other videos, articles etc. by other fabulous people on here but this will be my personal offering.

This week`s episode is about music education and how it can benefit the student in ways beyond the gaining of a musical skill. If you’re a teacher who wants a reminder about the impact you can have on your students or if you’re contemplating studying music and are curious about what you can really get out of it, check it out! And keep posted for more fun and inspiring tidbits in weeks to come! 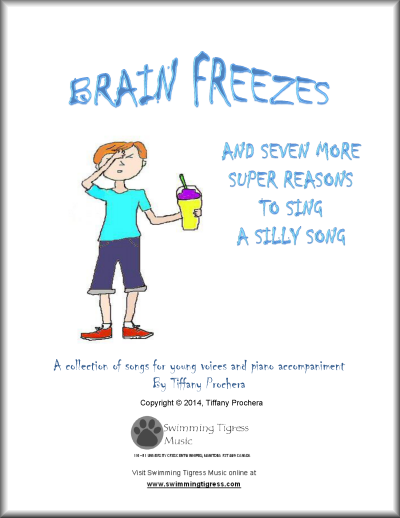 In other STM news, I’m uber pleased to announce the birth of my new child, Brain Freezes And Seven More Super Reasons To Sing A Silly Song!

The follow up to Bad Moods And Seven More Super Reasons To Sing A Silly Song, it's filled with 8 new songs students will love singing and teachers will love teaching.

To learn more, head over to www.tiffanyprochera.com  to view the musical score, listen to sound clips etc..  You can also visit the brand-spanking new Swimming Tigress Music store at swimming-tigress-music.myshopify.com.

Well, that's all for now. Hope you have a fabulous day and we'll see you next time!


Posted by Tiffany Prochera at 8:39 AM No comments: Links to this post

To learn more about Swimming Tigress Music and Notalotabull Press, visit us at www.swimmingtigress.com

You can check out Notalotabull Press's Storytime Blog for excerpts of Tiffany's writing.